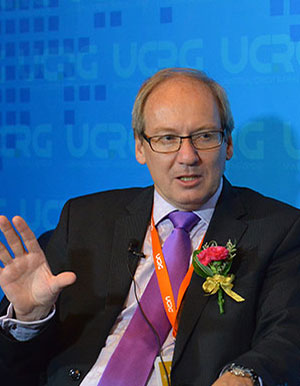 has over 30 years working experience in banking and finance – as manager based on his trading skills in Treasury Foreign Exchange, Interest Rate and Derivatives trading at Girozentrale, ERSTE Bank and Volksbank. He is currently supervising the unwinding of the major bank’s assets.

In Montreal 2007 the Council of the international traders association ACI appointed Mr Wiebogen unanimously President of ACI The Financial Markets Association. He was reconfirmed in this post in 2010 in Sydney. After two terms in post the Council awarded him Honorary President ACI The Financial Markets Association in Berling 2014. He was a founding member of the Euribor ACI, a member of the Education team and a member of the Committee for Professionalism within ACI. Mr Wiebogen is also a Trustee of the ACI Foundation and was appointed Honorary President of the China Free Trade Union in 2014 in Beijing.

His manifold functions and background qualify him as a financial markets expert in many areas but also fitted him with excellent diplomatic skills when leading 65 different nations within ACI. In addition to his consulting and training, Mr Wiebogen has been a featured speaker for various conferences in the world, focusing on Treasury, market conditions and regulatory changes. He disposes of a large international network based on countless meetings with financial institutions, central banks and other regulatory bodies (IMF, FED, IIFM, BIS, DIFC, SAFE etc.).