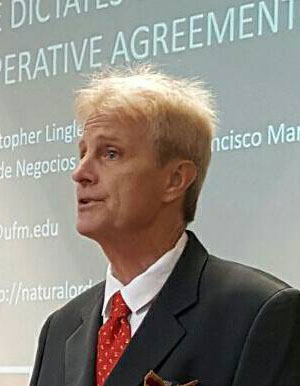 Christopher LINGLE earned a doctorate in economics from the University of Georgia in 1977. Since then, he has been employed at universities in Africa, Asia, Europe, Latin America and USA.

He is a passionate supporter of human creativity and volunteer actions that lead to social harmony. To this end, he travels relentlessly to anywhere in the globe to engage in discussions on the merits of institutions and public policy with respect to their impact on human liberty and dignity.

Currently, he is Visiting Professor of Economics in the Escuela de Negocios at Universidad Francisco Marroquín in Guatemala (since 1998), Adjunct Scholar at the Centre for Independent Studies (Sydney), Research Scholar at the Centre for Civil Society (New Delhi), International Political Economic Advisor for the Asian Institute for Diplomacy and International Affairs (AIDIA – Kathmandu) and Member of the Academic Advisory Council of the Globalization Institute (Brussels).

Dr. LINGLE’s research interests are in the areas of Political Economy and International Economics with a focus on emerging market economies and public policy reform in East and Central Europe, East Asia, Latin America, and Southern Africa. His work has appeared as chapters in books, the international media, and scholarly journals, including the American Economic Review, Foreign Affairs, Journal for Studies in Economics and Econometrics, Kyklos, and Pacific Review.

His book on the political economy of Singapore’s development was entitled, Singapore’s Authoritarian Capitalism: Asian Values, Free Market Illusions, and Political Dependency (1996). He is widely credited with anticipating the turmoil in the East Asian economies that began in 1997 (The Rise and Decline of the ‘Asian Century’: False Starts on the Road to the ‘Global Millennium’, May 1997).