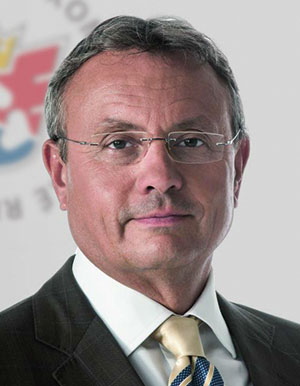 Vladimír Dlouhý is a current president of Czech Chamber of Commerce. After completing his studies at the University of Economics in Prague, he was engaged at the university as an assistant lecturer in the Department of Econometrics. In 1984 he became a founding member of the Institute of Forecasting of the Czechoslovak Academy of Sciences, where at first he worked as a researcher, later assuming the post of Deputy Director. From 1989-1992 he served as Minister of the Economy of the Czechoslovak Federal Republic, and from 1992 to June 1997 as Minister of Industry and Trade of the Czech Republic. He was a member and later Vice-Chairman of the Civic Democratic Alliance and a Member of Parliament. From September 1997 until the present he has been working as an International Adviser to the investment bank Goldman Sachs, and from 1998 to 2010 he was also engaged as an adviser for ABB. Since 2000 he has taught at the Faculty of Social Sciences of Charles University in Prague, and from 2004 to 2010 he was also engaged at the University of Economics in Prague as a teacher and as a member of the Scientific Board of the Faculty of Economics and Public Administration. He is the author of numerous scientific papers and popular articles.